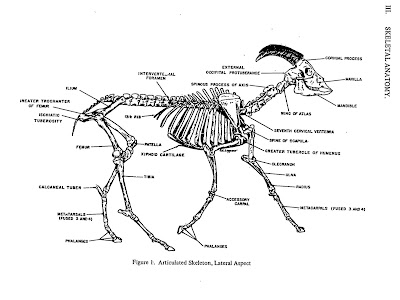 When evaluating animals, it's necessary to view their skeletal structure while they are standing properly with all four feet on a level, clear surface.

Their heads should be held up at a natural angle, legs should be placed so that the cannon bone is vertical and perpendicular to the ground surface.

Front legs should be squarely set directly under the animal's withers.  Rear legs should be placed so that a perpendicular line dropped from the pin bone to the ground runs down the center of the cannon bone. 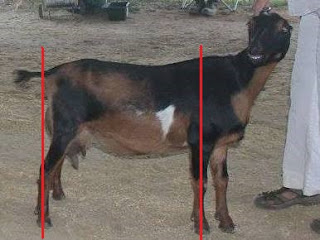 
You will see MANY pictures of dairy goats showing handlers pinching down the topline of the animal in the photograph.  They do this to flatten out the topline to make it look straighter, and/or to cause the animal to tilt the pelvis into a more level appearance.  Do not be fooled by this:  it is obvious to all judges and most knowledgeable viewers that this is done to alter the animal's real posture.  As a matter of fact, to me it only points out that the handler thinks their animal has a poor topline that needs to be "fixed" to begin with. 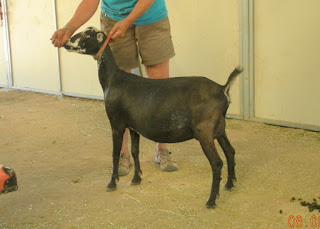 You will also see animals whose rear feet are placed BEHIND the pin bones, instead of up underneath them where they belong.  This is obvious when you notice that the cannon bone of the animal is not vertical or perpendicular to the ground.  This is often done thinking that placing the rear legs back will make the animal appear longer in the body, or to drop the topline so it appears to slope from wither to hips - a desirable trait when it is natural.

While these artificial methods of setting the animal up are common in the show ring, and show goat photos, they will not help you get an honest idea of your own (or other people's)  animals natural conformation, so learn to recognize these handling tricks when you see them.

Also, be aware that sometimes bucks look their best while they are peeing.  Pee Pee pictures (especially of kids) show the animal as being leveler over the topline, loin, and pelvis than they really are.  Check the picture for signs of 'leakage' either coming from the belly of the buck or a wet spot on the ground ;).